Get On Board: A Call to Governors

Last week Rhode Island passed a budget and the fight for free tuition passed a major landmark: ten states now offer some form of free college tuition to their residents!

States offering such a benefit range from the very red, such as Kentucky, Arkansas and Tennessee to the very blue like New York, Hawaii and Oregon. In June, Nevada’s Republican Governor signed a bill making their community colleges tuition free after it unanimously passed the state’s Democratically controlled legislature. The bill includes a provision requiring each community college that offers free tuition to also provide a mentoring program similar to Tennessee’s ground-breaking public/private partnership that provides a low-cost way for states to offer that type of support.

All of this activity raises the question: What’s holding the other forty Governors back from doing the same thing?

The idea is enormously popular. Nationally, over three-fourths of all voters think states should provide free college tuition to those who are academically qualified.

Support is wide spread, crossing partisan, generational and gender lines. Not surprisingly, support is strongest among families with children for whom finding a way to finance their child’s college education remains one of their biggest worries. Overall, 59% of Republicans support the idea and over 80% of Democrats and Independents do too. 85% of Millennials would like to see states provide free college tuition and so do two-thirds of older Baby Boomers. Support for the concept is almost identical between men and women. 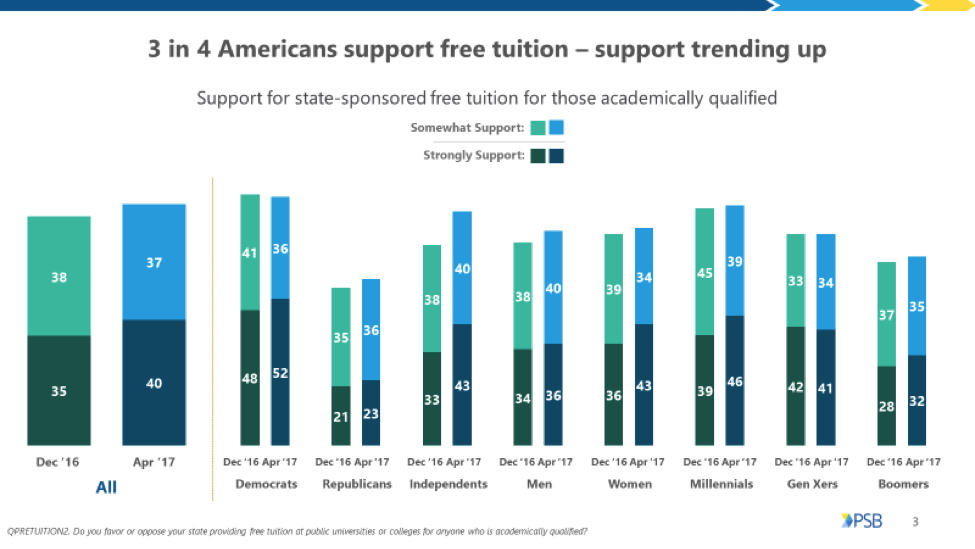 So if providing free college tuition for academically qualified students is so popular, why aren’t more Governors leading the charge to make it happen in their state? Some argue that it’s a nice idea, but they don’t have the money to pull it off. But the pioneer of free community college tuition, Republican Governor Bill Haslam, has demonstrated when a state takes maximum advantage of the federal government’s Pell Grant program and provides the “last dollar” needed to make tuition free, the actual state cost burden is quite low. In the first year of their program, the state spent only $15 million in order to bring an additional 4,000 students into their higher education system. First time freshmen enrollment jumped almost 25% at their community colleges and 20% at their technical colleges. That’s quite a return on investment for any state expenditure, particularly one that is so central to a state’s economic development in the future. Rather than being a new revenue burden for state government, free college tuition represents a sound way to grow revenue in the future from the increased earnings a college education provides to its residents.

If it’s not the money and it’s not for lack of popular demand, why hasn’t every governor made their higher education system tuition free? Honestly, at The Campaign for Free College Tuition we aren’t sure of the answer to that question.

Why some Governors remain reluctant to join their peers and make college tuition free, is a mystery to us. But we’d love to find out. If you live in a state without free college tuition, we’re asking you to write your Governor and ask him or her. If you get an answer, please share it with us. If you don’t, maybe it’s time for your state to get a new Governor.