The Campaign for Free College Tuition's latest survey, conducted in July, finds Americans in all demographic and political groups support making public colleges tuition-free. We tested three different proposals for free college tuition and all of them received at least 73 percent overall support, which is statistically identical to our January/February 2021 poll. 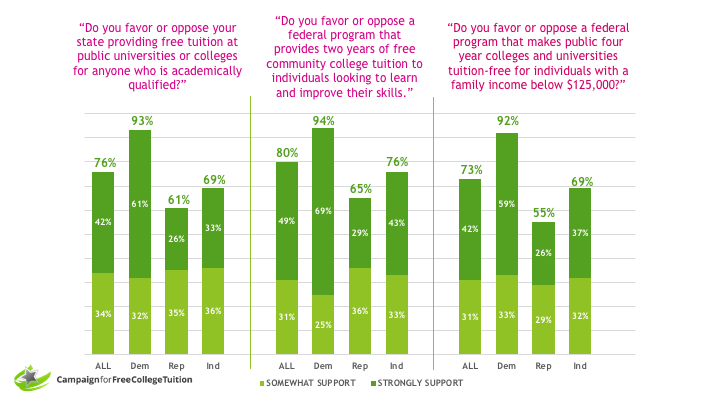 While Democratic support for tuition free college was nearly universal — ranging from 92 to 94 percent depending on the programs construct — Republican support for the three program designs ranged from 55 percent for the means-tested four-year federal program that President Biden has proposed to 65 percent for the administration’s proposal to provide two years of free community college tuition to individuals looking to learn and improve their skills. Independent support for that particular federal program was 76 percent. Independents supported the other tuition-free programs at 69 percent.

The most popular idea was for “a federal program that provides two years of free community college tuition to individuals looking to learn and improve their skills.” It garnered 80 percent support overall, including 49 percent who supported the idea strongly. The same questions in our January/February poll received 81 percent overall support with 51 percent strongly supporting the idea. Democrats (94 percent support), Millennials aged 25 to 44 (91 percent support), Asians (88 percent support), and Americans with an annual family income of less than $35,000 (88 percent support) were the demographic groups most supportive of this idea.

The polling was conducted in July, 2021 in partnership with CollegeAPP, PSB Research and SurveyGizmo with 1,002 respondents age 18+. The sample has a Margin of Error of +/-2.9% and was weighted to US Census on age, gender, race, educational attainment and region of the country.