Higher education is the key to economic mobility in America. A recent study, with unprecedented access to individual and family incomes, has proven the case for this proposition beyond a reasonable doubt. The study confirms what families already know, and why paying for their children’s college education is a high priority topic of conversation at kitchen tables across America. Governors in states as diverse as New York, Rhode Island, Tennessee, and Oregon are addressing this challenge by leading efforts to make their colleges tuition free and winning wide public support from grateful constituents. Without waiting for the federal government to get its act together, these pioneering efforts are creating an unstoppable momentum in favor of each state adopting free college tuition as the solution to economic inequality and the source of a more skilled workforce for the entire country.

The study done for The Equality of Opportunity Project rated every college in America on how well they did in improving students’ income after their college experience, whether they graduated or not, compared to their family’s income before they entered college. The top ten colleges—with the best track record of moving students from families in the bottom 20% of all incomes in America to individual incomes in the top 20%—were not any of the elite Ivy schools or even highly ranked public universities, but colleges that provided broad access to their campus and graduated students at better rates than their peers. The list includes Glendale Community College in California along with two California State University campuses in urban Los Angeles and exurban Pomona. Two campuses of the University of Texas—Brownsville and El Paso—were in the top ten despite their distances from the main campus in Austin. And New York’s CUNY system as well as its SUNY-Stony Brook campus—all of which would be tuition free if Governor Cuomo’s recently announced Excelsior Scholarship program were to be enacted by the state’s legislature—also ranked in the top ten engines of economic mobility in the country.

The study also found that the money spent providing these economically impactful college experiences had no correlation with their cost, but rather depended on the willingness of colleges to provide broad access to their institution. The average per student instructional expenditure at places like Stanford or Harvard was $87,100. While that amount of money did allow this group to produce the best results in terms of moving low income students from the bottom quintile of family income to the top 1%, the fact that  few students were lucky enough to be afforded such an education caused these types of colleges to fall well outside the top ranks of economic mobility engines. By contrast, the average per student expenditure for the top ten such engines was only $6,500 per student.  Although these colleges didn’t have the graduation success rates of Ivy League students, the study did find colleges that were achieving that rate of success, but with a much larger component of low income family students, were doing so with per student expenditures of only $24,600 on average—about one-third the cost at more elite institutions. 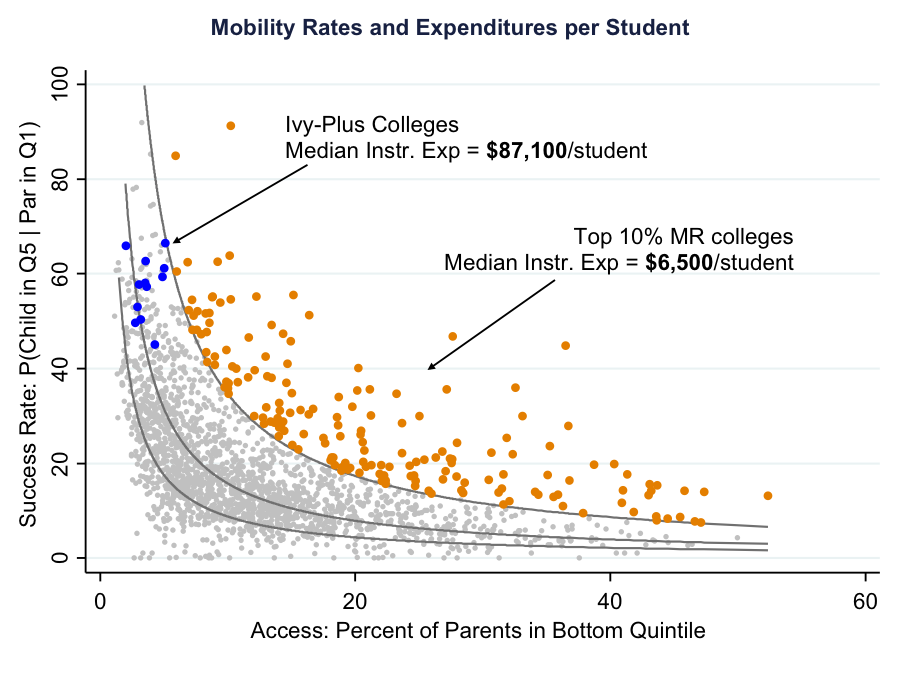 This data proves money need not be a barrier to moving many more people up the economic ladder through a higher education experience. Yet too many families see money as a barrier and don’t believe they can afford to send their children to college. When states eliminate that worry by making a promise that tuition will be free, enrollment rates soar. For instance, in Tennessee in the first year of their Promise scholars program, enrollment in their community colleges rose 24.7%. With this incontrovertible data showing that going to college is a key to upward mobility and that it can be done with relatively low levels of expenditures, every state should make their colleges tuition free and provide broad access to students from all walks of life.