Chronicle for Higher Education: FREE COMMUNITY COLLEGE PLANS MAY PROSPER IN THE STATES

Sixty-billion dollars for free community-college tuition will undoubtedly be a tough sell to a Republican-controlled Congress. But in statehouses and city halls around the country, advocates for free tuition are hoping that the national discussion the president’s proposal has unleashed will help them make the case that government-funded education should extend beyond 12th grade to include two years of college.

Originally published in The Chronicle for Higher Education. Read the full article by Katherine Mangan here.

Two of those programs, in Tennessee and Chicago, are familiar to anyone who’s been following the debate thundering around the proposal President Obama promoted in Tuesday’s State of the Union address. His plan, which Republican leaders have already denounced and many presidents of two-year colleges have cheered, calls on the federal government to cover three-quarters of students’ tuition costs, with states providing the rest. The proposal is largely modeled on a plan in Tennessee known as the Tennessee Promise. Mr. Obama also cited Chicago’s version of the idea as evidence that if a Republican governor and Democratic mayor could agree on an approach, a bitterly divided Congress could as well.

That’s probably not going to happen. But that hasn’t stopped advocates elsewhere from pushing the idea in their states. Even before the president’s announcement, similar plans and proposals were kicking around in states like Minnesota, Mississippi, and Oregon, while New Mexico and some parts of Michigan have pursued their own versions of the free-college strategy.

Many have encountered the same kinds of issues and questions that have been hotly debated this week. Questions like, who benefits most when tuition is free? What, if any, academic requirements should students have to meet? Should the tuition scholarship be in addition to or instead of Pell Grants for the neediest students? Where will the money come from, and how will colleges faced with an influx of students provide the counseling and support they need? 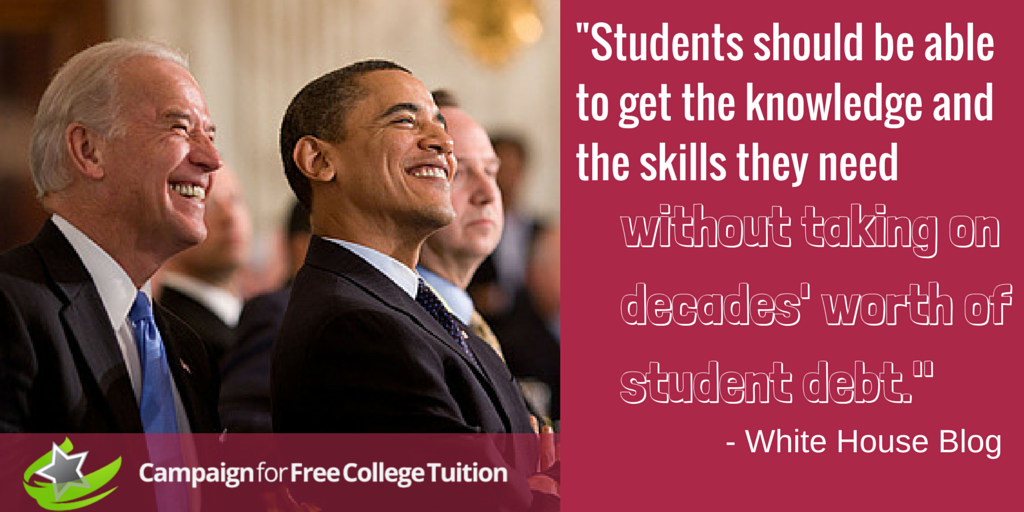 Morley Winograd leads a nonprofit group, the Campaign for Free College Tuition, that promotes similar programs across the country. He has been meeting with officials in five states that are considering plans like Tennessee’s (he isn’t saying which yet), and he expects some to be announced this year.

"The president’s proposal put the question of free college on the national agenda," he said. "Every governor is going to have to have a response to constituents who want to know, ‘What are you doing about it here?’"

Asked whether some state lawmakers might be holding off to see if the federal plan is approved, Mr. Winograd said that’s unlikely. "Given the makeup of Congress, I don’t think most people are sitting around expecting to get federal money for this," he said.

One criticism of many of the free-tuition plans and proposals is that they require students to attend college full time, which only about 40 percent of today’s community-college students do.

"We do think it’s important for students to try to complete in the expected time frame," said Mr. Winograd, who is also a senior fellow at the University of Southern California’s Annenberg Center for Communication Leadership and Policy. "They’re getting free tuition, so we think it’s possible for them to attend full time or close to it." Others point out, though, that tuition makes up a small portion of an annual bill that can top $16,000.