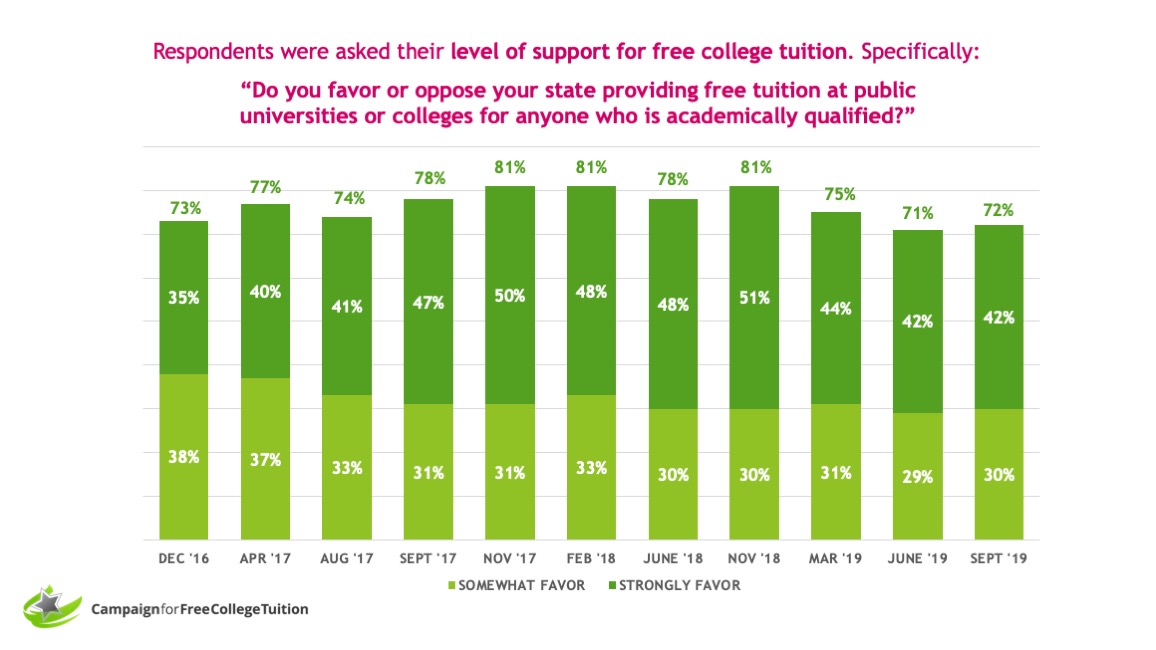 The message from our latest survey of voters for policy makers considering making their state’s public colleges tuition free is simple: Make college tuition free for those who are academically capable as universally available as you can and don’t ask students to jump through too many hoops to gain this benefit that voters of all political persuasions support.

In one of the most fractious and turbulent moments in America’s history, few issues inspire support across ideological and generational lines. But, as new nationwide polling shows, publicly funded free college tuition is one of those rare proposals that unites Americans — and retains that support.

National polling conducted in February by PSB Research for the Campaign for Free College Tuition reveals that fully 8 in 10 Americans (81%) want their state to provide free tuition to public colleges and universities to any academically qualified student.

When it comes to supporting or opposing government policies the mantra of follow the money becomes clear. People reveal their priorities when they tell their governments how to spend their hard earned tax contributions.

Recently, the Campaign for Free College Tuition and PSB Research asked Americans to prioritize how their state tax dollars should be spent. Americans have a strong and consistent message to their state governments – make sure healthcare is available and make sure young Americans have the opportunity to get the education needed to be successful. In recent months we saw Americans rally on the healthcare issue. Now it appears the prospect of making 2 and 4 year colleges’ tuition free might just be the next government priority rallying cry.

State Programs Preferred by Most

A poll conducted earlier this month by PSB Research on behalf of the Campaign for Free College Tuition (CFCT) showed another significant jump in support for free college tuition programs for students who are academically qualified.  Strong Support for state programs rose to a high-water mark of 47% -- up 12% since CFCT started national polling in December 2016.  Combining results from those who Strongly or Somewhat support the idea, 78% of the public now approves of the idea of free college tuition, also the highest level since CFCT polling began.