The Campaign for Free College Tuition in partnership with PSB Research surveyed 900 Americans aged 18+ in April 2020 to determine their level of support for a variety of free college tuition ideas. Overall, the results showed support for states providing free college tuition remains stable and strong, including using the idea as part of their economic recovery program.

In the 13 times CFCT polled on free college since December 2016, overall support of state programs making public colleges tuition-free has ranged from 70 percent to 81 percent. In our latest poll, 70 percent of Americans wanted their state to provide free tuition at public colleges or universities to any academically qualified student. 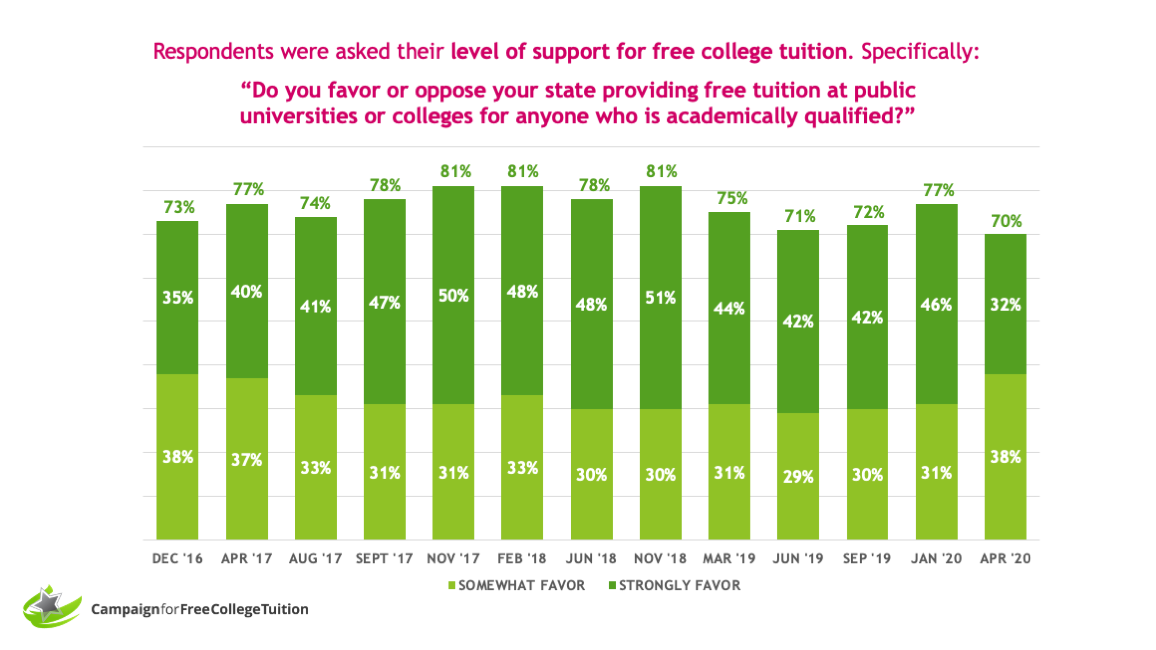 Not surprisingly, Americans under aged 54 continue to be the strongest supporters of free college tuition. Over 83 percent of those under 45 years of age supported their state providing free college tuition to anyone who is academically qualified. Those between ages 45 to 54 indicated 77 percent support.

The survey conducted during the COVID-19 shutdown, also tested four possible policy ideas for how the federal government could help states address the pandemic’s impact on peoples’ lives and livelihoods.

The most popular idea, earning 78 percent support from those surveyed, focused on providing college tuition benefits for those “on the frontline in the fight against Covid-19.” The question, which likened the idea to the GI Bill that provided WWII veterans with free college tuition, was strongly supported by 46 percent of Democrats, along with another 38 percent who somewhat supported the idea, for a total support level of 84 percent. Three-fourths of Independents and 69 percent of Republicans gave some level of support to the idea. 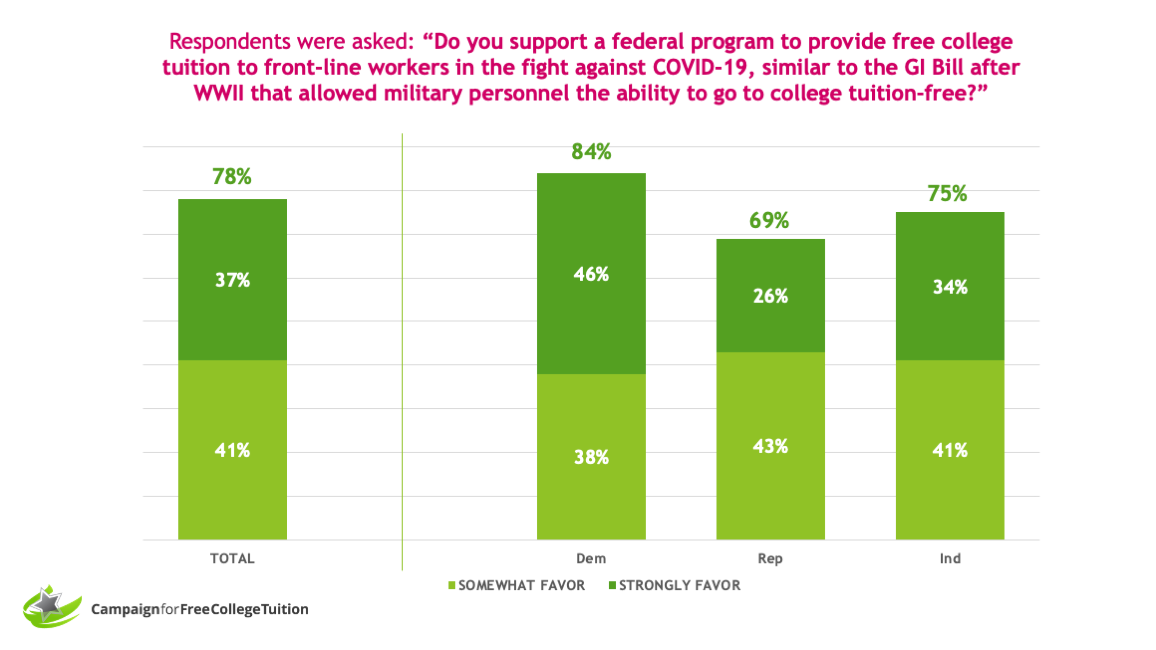 The other specific idea tested suggested the federal government provide states with money to enable adults over age 25 who are academically qualified a chance to return to community college tuition free to earn an Associate Degree or “industry-recognized occupational certificate.” Although 77 percent of Democrats and 70 percent of Independents supported the idea, only 53 percent of Republicans did so. As a result, overall support for this idea was 67 percent, 11 points lower than the GI Bill concept.

The survey also tested two ideas that anticipated actions Congress might take to provide relief to severely strained state or college budgets. Seventy-eight percent of those surveyed – including 90 percent of Democrats, 76 percent of Independents and 66 percent of Republicans – favored providing states money to avoid budget cuts. However, support for the federal government providing money directly to colleges and universities to help them “continue their current level of operations” was only supported by 71 percent of those surveyed. The decreased support for this idea, compared to others, was especially notable among Republicans, only 59 percent of whom supported the idea, with only 19 percent doing so strongly.

Mary Daly, the President of the San Francisco Federal Reserve Board recently stated, “We have too large of a fraction of our workforce that’s idle, and getting them back [will require] a doubling down on ensuring that people have the education they need to take the jobs being produced and are more resilient to these types of shocks.” Her comments make clear the need for government action and our survey research shows the public is prepared to respond positively to those governors who take the lead and ensure free college tuition is part of their state’s economic recovery program.