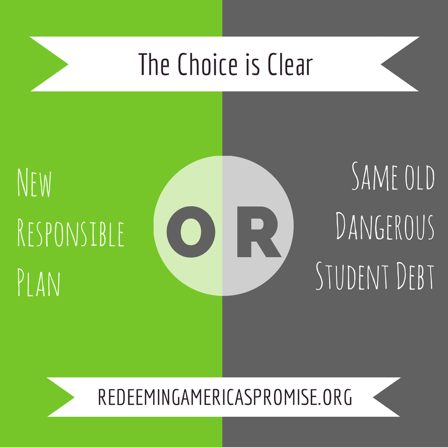 When it comes to student debt and paying for college, there’s very little to get excited about. In fact, the exciting prospect of going to college is all too often dampened by the reality of crushing debt. We all hear the stories. Houses can’t be brought because of terrible credit ratings. Diplomas are weighed down by tens of thousands of dollars of debt. There are hidden costs, manipulative loan companies, and miles and miles of red tape. People’s lives are ruined when all they were doing was seeking to better themselves. The amount that the economy is weighed down by student debt is almost unbelieveable, and the numbers are staggering. Frankly, it is as disgusting as it is un-American.

However, there’s a new solution to this problem making headlines, and surprisingly, it just so happens to work. It’s called Redeeming America’s Promise, and it could save higher education, as well as the future of the United States of America.

This groundbreaking plan comes from an intergenerational, bipartisan coalition, and in simple terms the plans two main tenets are as follows:

What makes this plan different though, is that income taxes don’t have to be raised a penny to do it.

Do you believe in the goals of this plan? If so, click here and share your support.