Student Aid is No Substitute for Free College Tuition

There are lots of people invested in today’s higher education system who insist that the rising price of tuition is a problem only for the nation’s poorest families. They argue sincerely and with great passion that increased money for students from low income families for both tuition and the other costs of attending college will solve the increasing inequality of higher education opportunity in America.

But they are wrong.  This chart puts the lie to such an argument and makes it clear that the rising price of tuition is a challenge for all but the wealthiest of American families.  Middle class families are finding college too expensive.  Period.  End of statement.  And those who do not recognize that simple fact are looking at the free college tuition issue through the wrong end of the telescope. 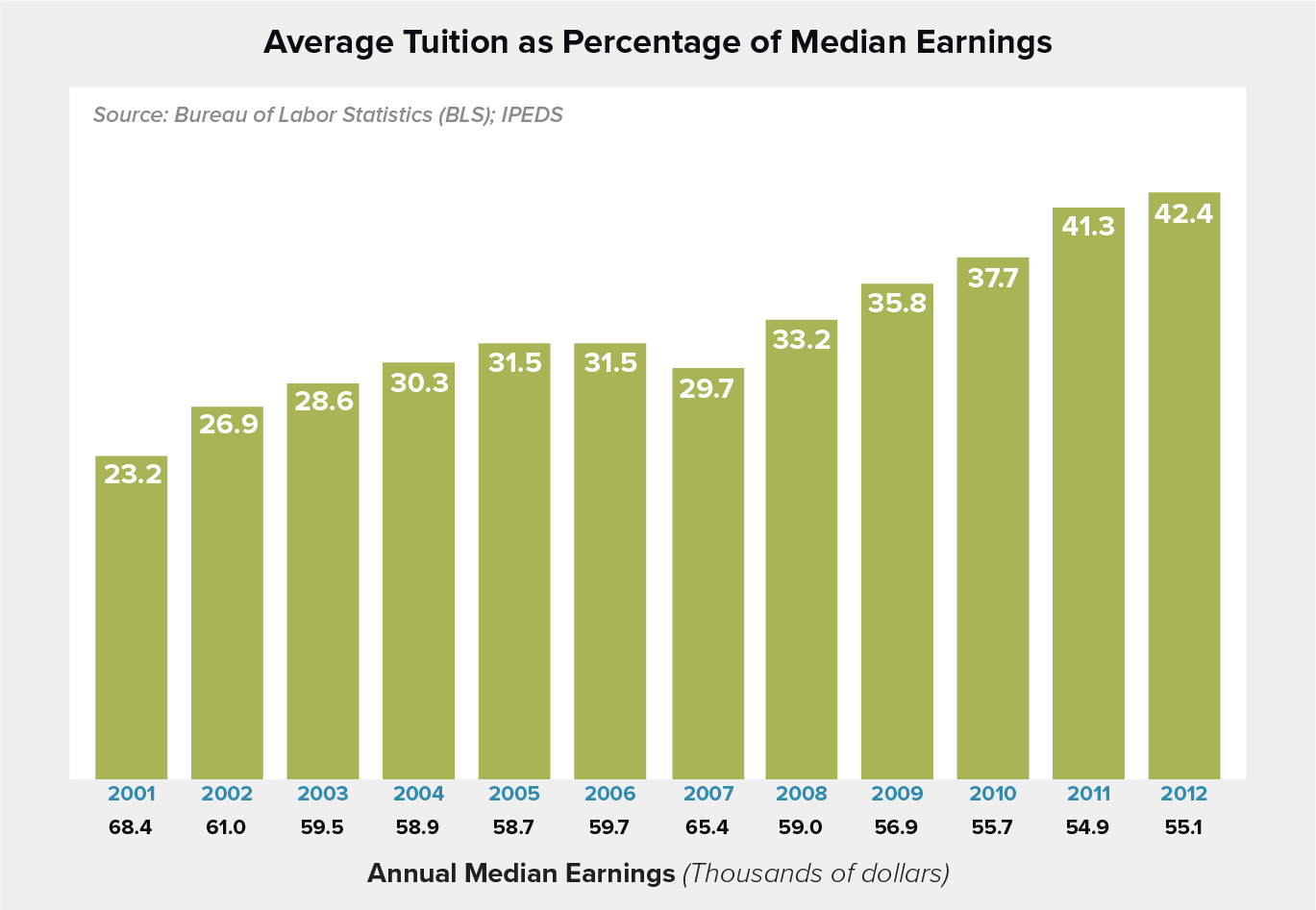 The chart captures the devastating impact of stagnant family incomes in this century combined with an out-of-control increase in the price of tuition. The percentage of a middle class family’s income devoted to tuition has almost doubled since 2001, rising to an unacceptable 42.4%. In the three years from 2010 to 2012 alone, the percentage increased by 13 points.  Meanwhile, the percentage of households making more than $100,000 has been shrinking, while the proportion earning less than $35,000 has grown. The problem of stagnant household income is particularly acute among those families with children who will be interested in attending college over the next ten years. According to one analysis, of the 450 counties in the U.S. with significantly more younger than older children, all but 100 of them have median incomes below the national average.

Defenders of the current system will be quick to point out that such calculations ignore the impact that Pell Grants and other forms of student aid have on the actual price of attending college vs. the sticker price that colleges advertise. But what they fail to mention is that almost all of these aid programs are available only to families whose income falls well below the definition of middle class in America. Even students who are “Pell eligible”—their family income is low enough to qualify for a Pell Grant—often do not get anywhere near the maximum Pell Grant of  just under $6,000.  The average Pell Grant is less than 2/3 of that already inadequate number.

Recently, Robert Birgeneau, the former Chancellor of the University of California Berkeley, went so far as to defend the current system of what he called “return to aid” by suggesting that free college tuition would actually increase inequality in higher education opportunity. He said that since low income students can get financial aid so they can attend the UC system tuition free, imposing a system of free public college tuition for everyone would eliminate the University’s current policy of taking money from wealthy families who can afford to pay tuition at some of the most expensive public universities in the country to help “low-income students with educational expenses other than tuition: food, shelter, books and computers, which typically make up over half of the total cost of attending college.”  Birgenau ignores the challenges of middle class families paying for college, assuming they can—which is clearly untrue.  Besides, colleges don’t use the money they get from wealthier parents just to fund grants to lower income students.  Often the money is used instead to dramatically increase overhead costs by building spectacular athletic facilities and enormously expanding administrative staff and their pay.

In California, the poster child for such out-of-touch, tone deaf university leadership is UC Davis Chancellor Linda Katehi, whose greedy behavior has created demands for her resignation from students and legislators alike. Not satisfied with her $424,360 annual salary, Chancellor Katehi took a total of $420,000 in income and stock across the 2012-2014 fiscal years as a board member for textbook publisher John Wiley & Sons. California legislators have appropriated major sums to encourage colleges to adopt Open Educational Resources that would make textbook material available online for practically no cost.  When some learned of her moonlighting for a textbook publisher whose ox is gored by OER, they demanded she resign.  She attempted to deflect their wrath by promising to donate about half of her ill gotten gains to a textbook scholarship fund, the proceeds of which are probably not available to middle class families who struggle to pay for the tuition that helps fund her salary. (Chancellor Katehi was also forced to resign from the DeVry Education Group board after  consumer groups and legislators expressed concern how a appointment with a for-profit university would benefit the University of California and students in California.)

We cannot expect the current higher education leadership to adopt a free college tuition system on their own.  They have too much invested in the current broken approach.  They are able to rationalize their support by failing to look at the data that demonstrate that their beliefs about current higher education funding are based on what was true decades ago, not today.

The only way to bring relief from this intolerable situation is to completely overturn the present regime and substitute in its place a system of free public college tuition just as equitable and available as our K-12 public schools.  Join our Campaign to make that happen in all fifty states before too many more families find themselves unable to provide their children with the American dream.