Napolitano successfully pushed for her Board of Regents to adopt a plan that would bring “certainty” to UC tuition rates by authorizing a 5% per year increase over the next five years. Thanks to the underlying impact of compounding each year’s raise, under her plan, tuition would rise from its current level of $12,192 per year to $15,564 by 2019.  The Board voted 14-7 in favor, but the dissenting votes included all the key elected officials among the Regents, including the Governor. He has offered UC a 4% increase in state appropriations for each year in his remaining four year term, but only if the system continued to freeze tuition at current levels as they agreed to do when California passed Brown’s temporary tax increase that finally put the state’s finances in the black in 2012.

Prior to proposing her tuition plan, Napolitano announced salary increases for all ten UC chancellors, infuriating  those opposed to the tuition hikes. Her fundamental goal, however, was to use the five year plan to raise tuition  to extract increased state funding from the Governor, offering to reduce this year’s increase by any amount over the Governor’s planned 4% increase that the legislature might pass. However, Jerry Brown is not limited to responding with just  one move of his own; his response – expected in January – could undermine President Napolitano’s gambit and establish an entirely different relationship between the UC and the state government to which it is ostensibly responsible.

By working in concert with the California State Legislature, whose leaders also voted against the tuition increase, Brown could withhold state funding to the exact dollar amount that would be raised by the proposed fee hikes and tuition increases and then use that budgetary savings to fund tax credits to tuition payers equal to the amount not appropriated to the University of California. One acute observer of California politics, columnist George Skelton called this the Nuclear Option, since it would fundamentally restructure how the state’s most elite universities generate their funds. But a step in this direction was already taken by the legislature when they adopted a “Middle Class Scholarship” program on June 15th, 2013 designed to refund in-state students at both the UC and the CSU system one-third of the tuition they are asked to pay. By moving toward a system where universities set the price of attendance but government delivers an offsetting payment to families forced to incur that financial burden, the state is actually moving down a path not unlike our own plan for how the federal government could issue scholarships to every low and middle income family that would cover the full cost of instate tuition. 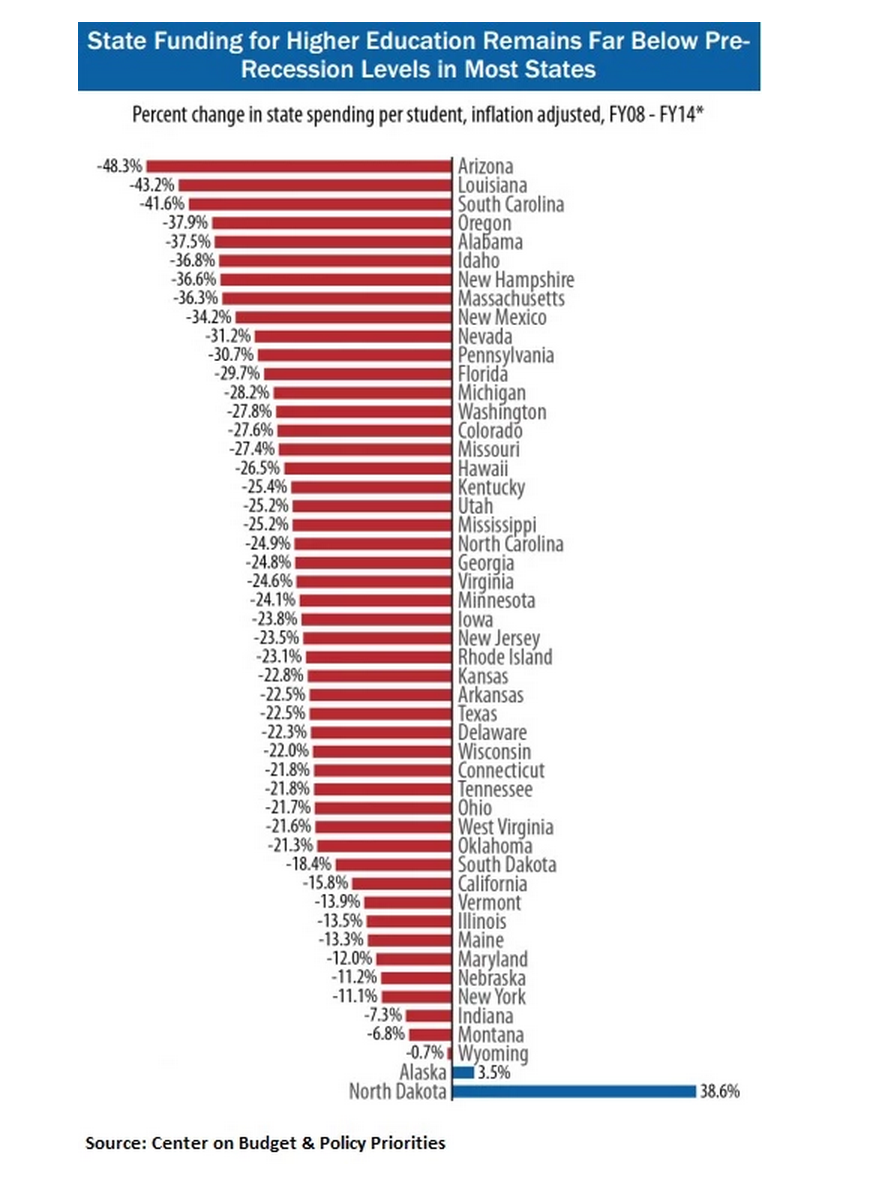 Unfortunately, the recent showdown in California between Jerry Brown and Janet Napolitano is only symptomatic of a larger trend of state divestment in public higher education. According to the Center on Budget & Policy Priorities, since 2008, states across the Union, except Alaska and North Dakota, have decreased funding for their state universities. However, as America emerges from the Great Recession, state funding for public universities has not returned to pre-recession levels. In fact, the average state is spending $2,026 less per student than before the recession.

Public universities serve a wide swath of their state’s residents; but increased tuition pinches out those students who have the ability but not the means to attend. Indeed, elite public universities like the University of California-Berkeley or the University of Michigan that Napolitano used as a comparison for her proposal, are in grave danger of becoming an instrument for reinforcing class distinctions by serving only those residents—and non-residents--that can afford its cost. As William Deresiewicz, author of Excellent Sheep, pointed out, the only solution to this threat is to “make elite private colleges obsolescent by returning to our commitment to low-cost, top-quality public higher education.” As he wrote earlier for our Campaign for Free College Tuition the goal should be "100 Berkeleys"—100 first-rate undergraduate institutions, with the proviso that I mean Berkeley as it existed before the 1980s, when it was still tuition-free.”

It’s way past time to make college tuition free at all public colleges and universities. Join our campaign to make that vision a reality in all 50 states.