Free college tuition continues to be a subject of much debate in federal, state, and local elections. Below we highlight some recent supportive comments on the issue. Let us know if there are any we should add!

"Higher education is the new high school, necessary to make it in today’s fast-paced economy. If we want to create a solid middle class with good-paying jobs, we need to remove barriers to better opportunities. Arizonans shouldn’t be excluded from economic success because of skyrocketing tuition and suffocating education debt.” Read On

"Through the new ArFuture Grant, we are ensuring that all Arkansans have access to affordable higher education. This plan will not only increase access to post-secondary education by removing the financial hurdles that keep many from enrolling, but it will also incentivize our students to better themselves by providing an opportunity to climb the economic ladder, while serving their communities. ArFuture will send a clear message to prospective employers that the state is committed to building the 21st century workforce that will attract industry and allow the Arkansas economy to thrive." Read On

“The high cost of college is dragging down our economy and has become a barrier to entry...We need to make college at UC, CSU and Community College tuition free again for in-state students." Read On

“We are calling for the launch of the California College Promise, a bold effort to offer two tuition-free years of community college for responsible students. This promise is true to California’s tradition of advancing our educational system at critical junctures to give future generations better opportunities to succeed." Read On

“Free college should be an investment in the entire state, rather than just needy individuals...Let’s not make this more difficult than it is. We already do this for K through 12, and nobody bats an eyelash about it." Read On

“There are a couple of things missing in this country: kindness, moral leadership, and people who deliver, who don’t invent problems they can’t solve, but look at real problems and address them. Potholes, infrastructure, making college free, [raising] the minimum wage,”  Read On

"[As governor, I will prioritize] Expanding access to higher education – including to older individuals – by making Connecticut community colleges tuition-free to in-state students who commit to living and working in Connecticut for a period of time after they graduate." Read On

"But access to education should not end the day a child graduates high school. That’s why I have proposed providing two year college for all students in Atlanta, tuition free. I believe that by providing a solid foundation of education, our children will be able to put an end to the cycle of poverty that so many families in this city have struggled to escape for far too long." Read On

“In today’s economy, a high school diploma is often not enough to guarantee a fair shot at a middle class life. It’s time to expand the promise of free public education to encompass college.” Read On

“Chris will establish an Illinois Promise Program, learning from the work of states like Tennessee, Oregon, Minnesota, New York and Kentucky, to provide a minimum of two-years of tuition and fees for low- to middle-income students who are eligible to attain a degree or credential at a community college or trade school in Illinois. He will also work with our public institutions to incentivize transitioning merit-based aid to tuition based aid, and expand upon the success of our Monetary Award Program (MAP) grant student assistance program.” Read On

“For me, the American dream didn’t mean that my parents were able to pay for my college or graduate school. … The idea that college has put us in a place where we ask young people to do the right thing and go to the best schools and then they are encumbered for the rest of their lives is insane.” Read On

“[Paterakis] said he’d like to see Illinois consider a plan to finance college for students coming from families with incomes of less than $100,000 a year, provided the students committed to staying in the Land of Lincoln for several years after graduation.” Read On

“Tuition has gone way up in this state. It's become harder and harder for middle class families to put their kids through school. College is not affordable in this state when you don't have (Monetary Award Program grants for low-income students) — and we don't fund MAP grants. So we've got to step back up to the plate here, and we've got to make sure that people who are seeking to get a degree in higher education have the ability to get it." Read On

“As governor, I will end student debt and make it possible for every Marylander to attend community college, public university, or learn a trade for free.” Read On

“I support proposals to make community college tuition-free through state based cost-sharing programs. I support using such programmatic dollars to increase the size of Pell Grants and make four-year college degrees significantly less costly. Finally, I stand by union run apprenticeship programs that link community colleges with employers and support employers who are directly looking to offer apprenticeship programs.” Read On

“Too many young people and their families are being held back by the unaffordability of a college education. Yet our leaders have sat by as the cost of college spiraled out of control. We need a governor who is committed to lowering the cost of college and ending the brain drain from our state.” Read On

"This society should say, ‘We’re going to pay for college because you need college to be successful'...And New York State — New York State is going to do something about it." Read On

"Pillich announced her plan to revamp the education system in Ohio - including free college tuition for Ohio residents who stay in the state for 10 years after graduation...'I want to make a transformative investment in education,' Pillich said. 'Over the last seven years our ranking has fallen from 5th to 22nd and obviously that's a result of having the wrong priorities in Columbus.'" Read On

"We want to make it clear to every family in Rhode Island that our state’s commitment to public education doesn’t end at grade 12. Our public colleges are engines of upward mobility, and [Rhode Island’s Promise] will open the doors to even more Rhode Islanders looking to access them." Read On

"...leading the effort to create the Tennessee Promise scholarship program was one of the proudest accomplishments of my life." Read On

"As governor, I’ll work to ensure that every Virginian who wants good-paying work has the skills to fill these new collar jobs. We’ll provide an opportunity for any Virginian, no matter where you live or what your background, to obtain a free associate degree or workforce credential that meets employer demands. By providing that free education as a supplement to a high school diploma or as part of a retraining opportunity, we’ll build a best-in-class workforce where Virginians of all ages are able to realize their full potential and contribute to our commonwealth’s economy, our quality of life, and our civil society." Read On

"I will implement a new program that provides every Seattle public school graduate two years of free tuition to attend one of our community or technical colleges. I call it the 'Seattle Promise,' because it’s a promise to the next generation that we will open that door for them. " Read On

"People are looking for an opportunity to follow their dreams, to get the skills they need for a better job. Often the perception of not being able to afford college is what keeps people out of college. I don't want that to ever be a barrier." Read On

Are you interested in adding free college tuition to your campaign platform? Check out our candidate guide book Free Tuition for the Win or contact us now.

Free Tuition for the Win is a report for candidates running for state elected office by The Campaign for Free College Tuition, and Rise, Inc. In our research, we solicited the input and feedback of candidates, campaign managers, experts in higher education policy, students, and more.

What's in this report? 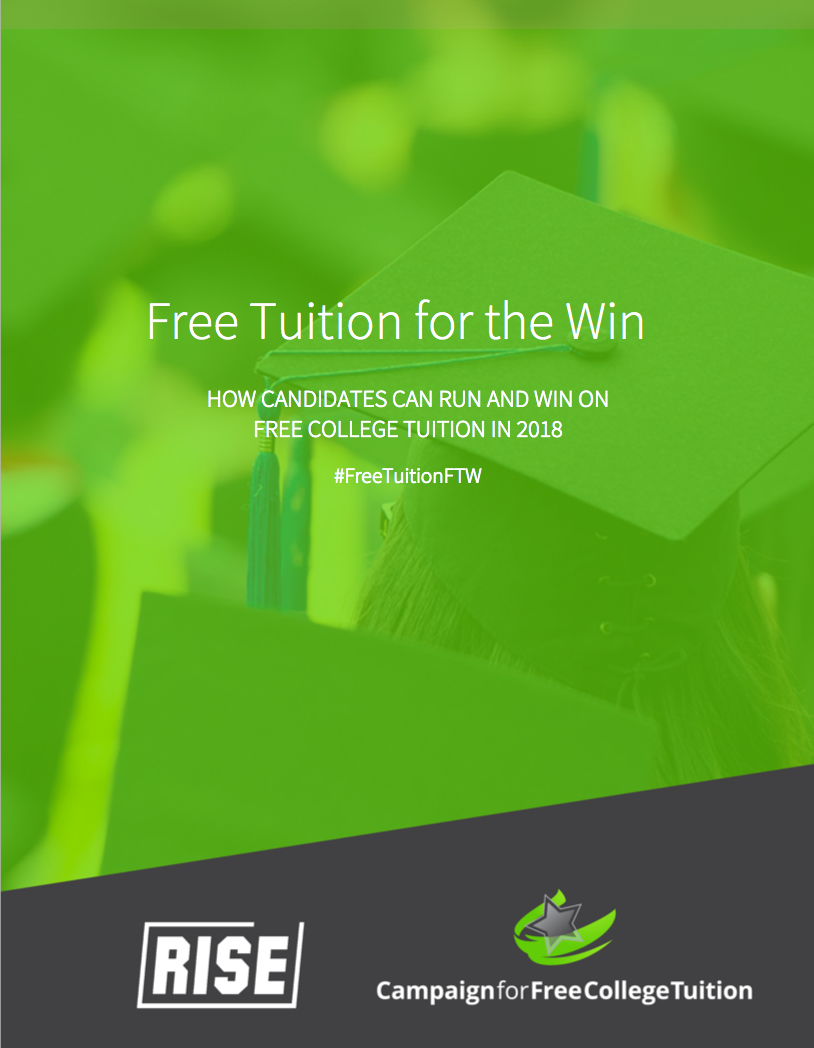