Fix the Problem of College Affordability—Don’t Deny It 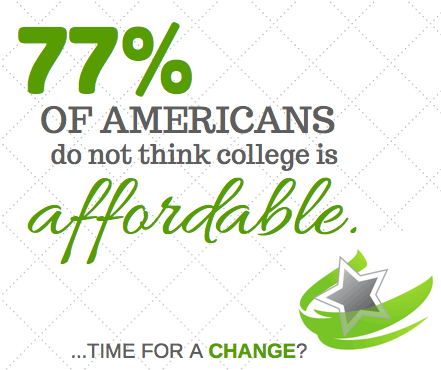 It is becoming increasingly clear that the higher education establishment is tone deaf on the impact of the escalating price of college tuition.  As a result of their unwillingness to embrace change, for the first time in American  history,  students and their families are now paying half or more of the full cost of college—an 18- to 22-percentage point increase at public four-year institutions over the last decade. The only solution to this growing threat to the American Dream is to make public colleges tuition free. The latest “How America Pays for College” report from Sallie Mae shows that parents belief in the benefits of a college education for their children remains as strong as ever, with 85% of parents surveyed strongly agreeing that it was an investment in their child’s future. The survey found that especially among low-income, Hispanic and African-American families having their child earn a degree was a critical part of the American Dream. Two-thirds of those surveyed felt a degree was more important than ever and 58% were willing to stretch their family’s finances to pay for it.

Unfortunately the need to make that sacrifice was becoming more and more necessary as the price of college continues to skyrocket beyond the ability of a family’s financial resources to pay for it. Last year, parents’ and students’ income and savings represented only 38% of the money used to pay for tuition while student and parent borrowing had to be used to pay for 27% of those costs. Grants and scholarships from private and public sources were only able to help with 30% of tuition bills. Not surprisingly, the same report found that two-thirds of families eliminated potential colleges based on cost in the course of deciding where their child should attend.

The response from the establishment to all of this concern has been to either deny the problem or downplay its impact.  David Leonhardt has devoted three of his Upshot columns in the New York Times to the issue—each one with more outrageous distortions of the data than the last. Sandy Baum, a consultant to one of the biggest defenders of the status quo, the College Board, calls the Bureau of Labor Statistics data showing the list price of tuition doubling in a decade “misleading.” She points instead to College Board’s data that indicates the actual cost paid, after all grants and scholarships, has gone up by no more than half that amount, as if that should make parents feel better about their worries over how to pay for their child’s college education.

Rather than denying the problem exists or downplaying its severity, those who created our current system for financing higher education should join in our cause to make public colleges tuition free for every family in the country regardless of their economic circumstances.