President Biden’s free community college tuition proposal in the American Families Plan may be the ultimate middle-class benefit. Americans with some college, more than a high school diploma but less than a bachelor’s degree, are smack in the middle of the education distribution and of the income distribution. In the past this middle spot was held by those whose education stopped at grade 12. If we’ve long thought that getting to that middle position should be free, as in high school being free, it makes sense nowadays to make community college free.

Digression: We’re talking here about economics, asking what would happen if free community college comes to pass. If your interest lies in the how free community college might come to pass—especially if you’re interested in local and state efforts—grab a copy of The Path to Free College, by Michelle Miller-Adams. (Actually, some important economic questions raised there too!)

Biden campaigned on a much broader vision of eliminating tuition, endorsing the Sanders-Jayapal plan for free tuition at all public universities. The current proposal is basically community college only, plus a subsidy for the first two years at four-year, minority serving institutions. Whatever one thinks about including bachelor’s degrees, free tuition at community colleges ought to be a non-partisan no-brainer. There is though, a good argument for extending the community college subsidy to the first two years at all public colleges.

In what sense is community college, or even a year or two at a four-year school, today’s equivalent of the high school of yesteryear? Here is a picture of educational attainment in the United States since the 1950s. 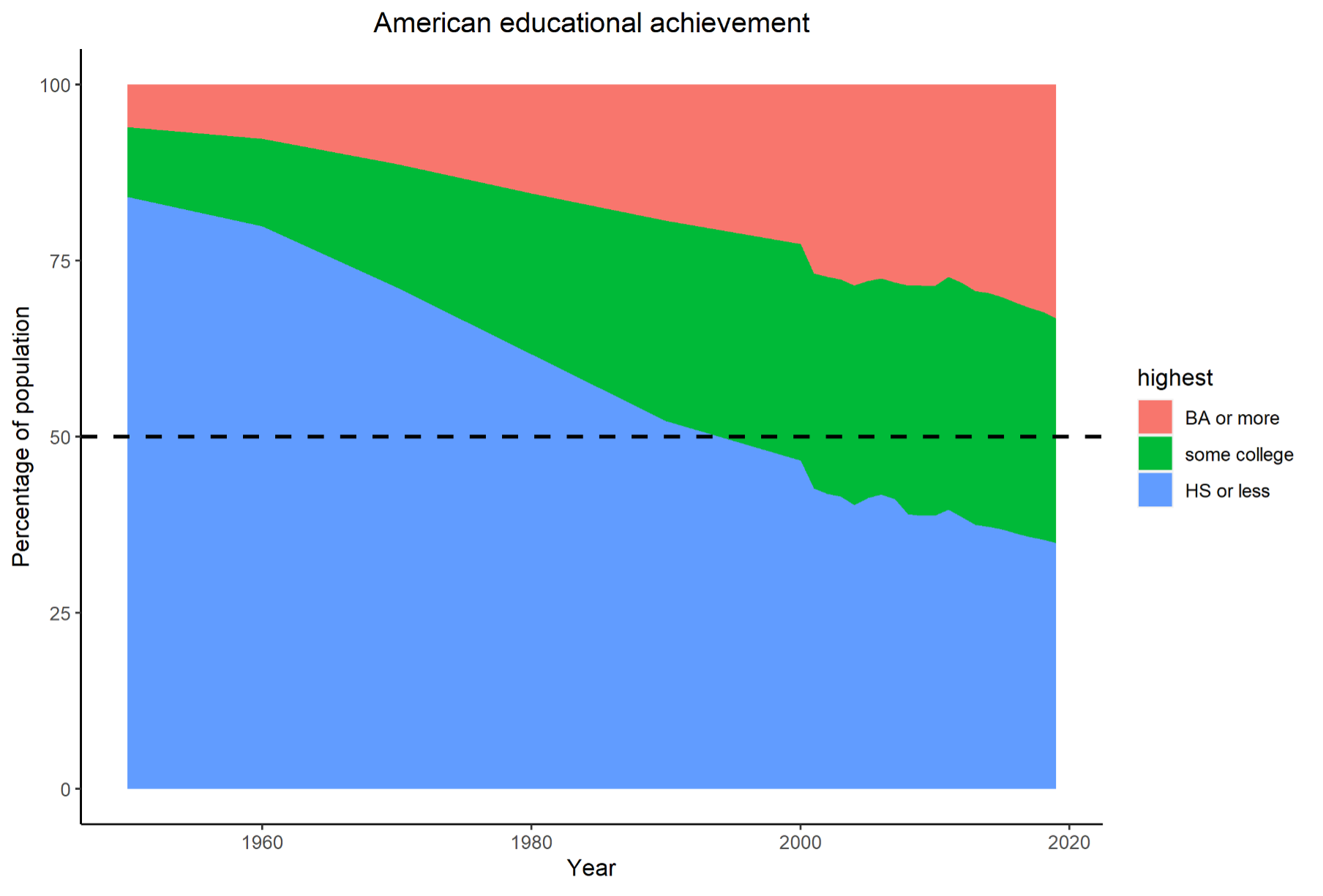 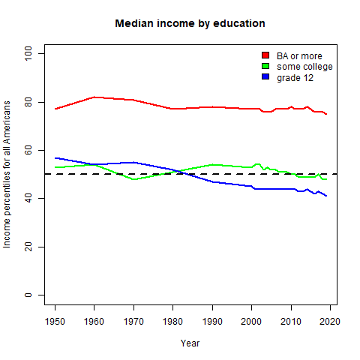 Back in the ‘50s and ‘60s someone with a grade 12 education made a bit above the middle income in the country. No longer. That position has been taken over by those with some college. While there are good arguments for extending free tuition past just two years of college, students who complete a four-year degree are already rewarded with notable higher average incomes. If funds are limited, it makes sense to concentrate first on helping those in the middle.

Tuition subsidies should be neutral, letting a student and their family decide on the best college path. This can be accomplished by letting students apply the funding for community college to the first two years at any public college—not paying all the tuition at four-year schools, just the same amount the student would receive at a community college. Because community college tuition is so much lower than tuition at four-year schools, this would not nearly make four-year college tuition-free. It would, however, greatly reduce the government’s incentivizing the choice in one direction or the other. The Biden plan already includes a subsidy for the first two years at HBCUs and other minority serving institutions for students from families earning less than $125,000. Broadening the plan to the first two years at all public four-year schools gets the incentives right and likely broadens the American Families Plan political appeal as well.

Dick Startz is Professor of Economics at the University of California, Santa Barbara. He is the author of Profit of Education and writes on both K-12 and higher ed issues at www.ProfitOfEd.org. Data courtesy of www.ipums.org.